The free live stream event will be hosted by legendary alpinist and Guardians of the Ice founder Jim Elzinga. Join us for an evening of candid conversation, education, beer tasting and Q&A in support of the Columbia Icefield. Series One will feature keynote speaker extreme skier Dylan Cunningham and Banded Peak brewer Mark Zabot.

Cunningham seeks out big new lines on the steepest faces of the Rocky Mountains and recently skied down the daunting north face of Mt. Robson, the highest mountain in the Canadian Rockies, becoming the third person ever recorded to do so. This will be the first time Cunningham speaks publicly about that experience. He is an ACMG accredited ski guide working for Canadian Mountain Holidays in the Columbia Mountains and as a guide for Athabasca Ice Walks on the Athabasca Glacier in the summer.

Jim Elzinga is one of the few Canadian alpinists whose focus has always been finding new, difficult routes on the world’s most challenging peaks, including Mount Everest. Jim made multiple first ascents in the Canadian Rockies, China, Pakistan, Peru, and India. Jim’s focus is now split between searching for bold new ice and alpine routes and building support for the Guardians of the Ice.

Jim says, “I’m stoked by this new partnership between Banded Peak and Guardians of the Ice! The retreat of the Icefield is so significant for our communities and resonates in the context of the climate emergency. We are confident that we can make a meaningful difference with this kind of support.”

Mount Columbia West Coast IPA is the first of the IPA series. $2 from every four-pack sold will be donated to support Guardians of the Ice and their Columbia Icefield program. By drinking the GOTI series you are helping protect one of North America’s most important water resources. Orders can be placed online www.bandedpeakbrewing.com , purchased at the Banded Peak Taproom, or local liquor stores across Alberta.

“Climate change is occurring in our backyard and we can literally see the effect it is having on our environment. We feel that this is an important partnership that promotes education to support and encourage climate stewardship. The Rockies are the source of so many different important aspects of all our lives from recreation to the water we drink and ultimately the beer we make. Protecting that should be a priority; definitely one we should be well educated on.” Matt Berard, Founder, Banded Peak Brewing. 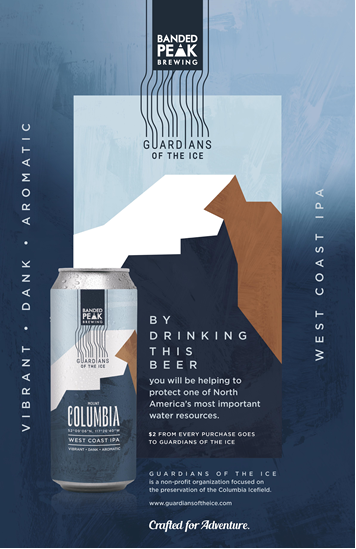 On May 27th, 2020 we enjoyed a truly inspiring and engaging live webinar with the generous participation of our four “luminaries.” More than 2,000 people registered; students and teachers (and others) from across Alberta and beyond.

Check out this 7 minute video clip of Bob Sandford’s moving and inspiring opening remarks. He has a poetic and positive way of expressing his broad and deep understanding of the regional and worldwide significance of climate change impacts on the Columbia Icefield and vital water supplies.

A live webinar with four luminaries of climate/ice/water science May 27, 2020, 11:00 am Mountain Time, featuring:

Hosted by Alberta Tomorrow and Guardians of the Ice with the support of Alberta Ecotrust Foundation.

For a fuller experience of the interactive webinar, to hear from the other three scientists and their responses to questions from the students click here 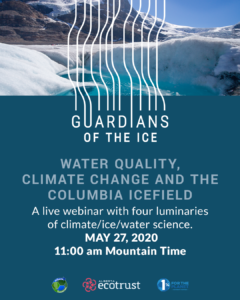 Your generous gift will help us keep moving forward on our purpose: to build broad support for a low carbon future
With any gift of $100 or more, we will send you one of our Guardians of the Ice tee shirts ($45 retail)
They are made with a beautifully soft bamboo material by Jerico, a Socially Conscious Canadian Company
Guardians of the Ice is incorporated under the Canada Not-for-profit Corporations Act

To marry art and science in film, photography and text to illuminate the significance of what is being lost and the infinite possibilities to be realized in grappling with this urgent global climate crisis.

To mobilize a broad social movement around the retreat of the Columbia Icefield breaking the logjam of apathy and complacency towards the climate crisis. We can accomplish this by becoming committed climate activists in a community of individual action, community collaboration and policy change.

Your generous gift will help us keep moving forward on our purpose: to build broad support for a low carbon future
With any gift of $100 or more, we will send you one of our Guardians of the Ice tee shirts ($45 retail)
They are made with a beautifully soft bamboo material by Jerico, a Socially Conscious Canadian Company
Guardians of the Ice is incorporated under the Canada Not-for-profit Corporations Act